Ex-Bideford Black miner Gerald Ford sent this excellent account to the blog about his early years at the Chapel Park processing plant - in his own words...

"I will begin to tell you of my life as a worker for the Paint Mines (Bideford Black Pigments) . It started on a day in 1957, when I was 1st employed as a factory hand. The first thing was to meet all the employees there, and if I can, I will remember all their names. First of all we will start with the men underground (Miners). Wally Mugford( Underground Foreman). Bill (Bronco) Cole. Ronnie Short. Donald Glover. and Bert Bowden.

In the Mill and on the surface , men  workers.  George Arthurs(Mill Foreman). Vic Hookway. Martin Pascoe and Johnny Bissett In the packing  shed and John ???????.
In the office was the Boss Howard St Louise Cookes, who we all had to call Sir, but behind his back we refered to him as Cooky beside other unrepeatable names, and the secretary then  a miss Janet watts. But after being employed there on and off for 10/11 years there was a great number of staff changes, to many to put in this. Names, I will and may say later in this story. 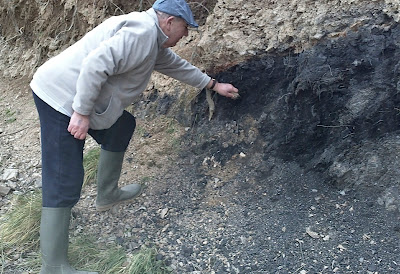 I was first taken to George to be given my job, which was on the nozzle in the mill taking off bags of ground pigment at 1/2cwt at a time, about 20 per hour (Lovely and warm to sit on in the winter,as it was not the warmest place to work.

To get to the nozzle the culm or pigment had to go through the following proceedure. Firstly it had to be mined, using ,picks,shovels, and pneumatic drills. Then brought to the surface up the Inlcline (1 in 3) by hoisting trams which were the trucks,a matter of 400-500 yards, using a bell system for go ,stop etc.

Once the trams got to the surface they were unhitched then pushed 250 yards using 2 men along the tracks to where they were tipped onto the Feed Bed area awaiting to go through more production.

The pigment was then shovelled on to the feed belt so much at a time so it was not to fast , clogging up, not to slow as to run empty,causing damage to the rollers in the Mill.
At the end of the Feed belt it was tipped in to a very large turning roller drier, which would take approx 1 hour to go in one end then come out the other.

Then it would go onto another belt to take it to the hopper which was to allow the culm to enter the very noisey grinder (large heavy rollers) to be crushed to a very fine powder (Biddiblack)  then blown to the Nozzle, paked awating shipment.

I spent a few years working on this part of the of the production of Bideford Black Pigments and went elsewhere to join the army etc. I returned to the paint mines several years later, to start again, but this time I was underground, starting as a miner working my way up to the underground foreman. Cooky was still there as the Boss."