The geologically unique earth pigment Bideford Black was mined for at least 200 years in Bideford and surrounding areas until 1968 when cheaper chemically produced ‘blacks’ made the industry commercially unviable. The soft black clay-like material ran alongside seams of high quality anthracite (coal) that were also mined to be used locally. ‘Mineral Black’, or ‘Biddiblack’, was commercially produced for applications in the boat building industry, for colouring rubber products, for camouflage on tanks in WWII and was even bought by Max Factor for the production of mascara. Evidence of the industry can still be found in street names and certain places around the town if you know where to look but generally the younger generations know very little about its heritage, if anything at all...

The history of the Bideford Black Mining Company and others who mined the seams has been comprehensively documented in a small booklet, BIDEFORD BLACK - THE HISTORY of a UNIQUE LOCAL INDUSTRY, published by SOUND ARCHIVES NORTH DEVON in 1994. (The booklet is available form the Burton Art Gallery & Museum shop for a very reasonable price.) 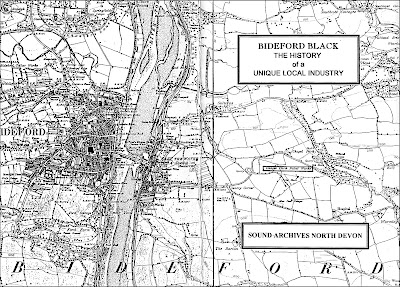