Finally! we're almost ready to launch the artworks & film - the outcome of a one-year journey for all involved 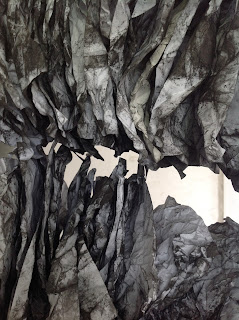 Dirt & diamonds, scents & sounds…….the Bideford Black Next Generation exhibition offers a fresh perspective on this enduring material. These artists have created distinctive new works for future generations to enjoy. If you haven’t already done so, catch the film trailer here.

The full film will be shown in the gallery, sharing a record of the artists research, a privileged glimpse of how artists work.

Bideford Black: The Next Generation

This exhibition at the Burton gallery provides a surprising take on a traditional material. Eleven artists and a film-maker have created new artworks using this unique black coal - and some of the works will join the gallery’s permanent collection for future generations to explore, providing a legacy for the art of today.
Valued for its silky texture and pitch black hue, Bideford Black pigment has historically been used by artists, industries and the military. In next month’s exhibition, a new generation of artists and users ask questions about past and present uses of this dark resource.

Bideford Black: The Next Generation presents a range of sensory, physical, emotional and abstract encounters with Bideford Black pigment – a dark, sticky substance found in the North Devon landscape. The exhibition is the culmination of a year of exploring and making – a year in which the artists and film-maker pushed Bideford Black to its physical limits and thought about what the material might mean today.

For the first time ever, The Burton has specially commissioned the artworks for Bideford Black: The Next Generation, and many of the works will become a new permanent part of the gallery’s collection.

The project is also on social media:

Warren Collum, Exhibitions and Collections Officer said: “Bideford Black: The Next Generation is all about linking the industrial heritage of Bideford and its local pigment with contemporary artists’ research and ideas. This exhibition will confound audiences’ expectations about what this black earth pigment can do. It’s almost as if we’d been working with a group of alchemists, scientists and magicians for a year!”

Carolyn Black of Flow Contemporary Arts, who co-produced the project with arts consultant Claire Gulliver, said: “Since that first day in 2014 when we met all of the artists and viewed the seam together, until this launch, we’ve been fascinated by how the artists ideas have evolved from the first expressions of interest. Biddiblack, as locally known, really has been stretched to its limits. We’re delighted that many of these artworks will be joining the Burton’s collection permanently.

Phil Gibby, Area Director, South West, Arts Council England, said: “This is an exciting exhibition of work by some outstanding artists and with a very special local connection. In the south west we’re justly proud of both our artists and our local heritage; this project brings both sides together in a new and surprising way and I’m delighted that we’re supporting it.”

Glamour and intrigue at Greencliff

At times it felt like being an extra in a James Bond film. This week offered the first glimpses of a unique synthetic diamond made entirely from Bideford Black. Conceived by artist duo ATOI and created with the help of a specialist manufacturer, the diamond was delivered in person to Burton Art Gallery, Bideford as part of a surreal and surprising Wednesday.

A day that began with excitement, anticipation and thank-you flowers for the manufacturer and sponsor of ATOI (whose company name will be revealed shortly), became bizarre and fantastic as the artists and diamond manufacturer decided to take the diamond to Greencliff on the North Devon coast, where the raw Bideford Black pigment is found.

High heels were swapped for borrowed walking boots as artists, diamond manufacturers and suited entourage formed an odd procession, snaking through the fields to Greencliff in a strange rite of pilgrimage and returning to source.

ATOI's synthetic diamond made from Bideford Black will be one of the works on show as part of the Bideford Black: The Next Generation exhibition at Burton Art Gallery, Bideford, Devon. Produced by  Flow Contemporary Arts in association with Claire Gulliver.