The Story of Bideford Black - Schools Exhibition at the Burton 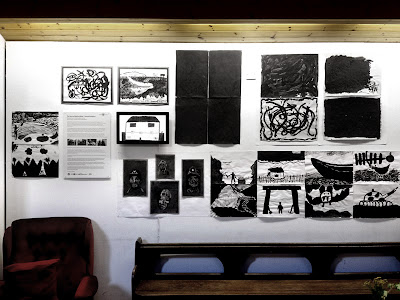 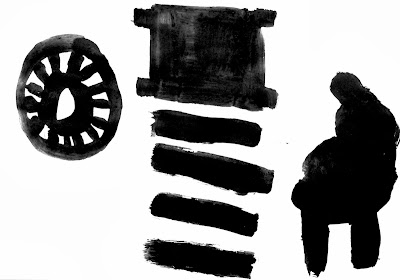 
A selection of the paintings are displayed in the Café at the Burton for this special exhibition from 21st September to 21st October. The artworks created were spontaneous pieces, made by the children’s response to the material and what it feels like to paint with. The original paintings give a sense of the material, its textural qualities and how it behaves when applied to paper; some paintings are just black! 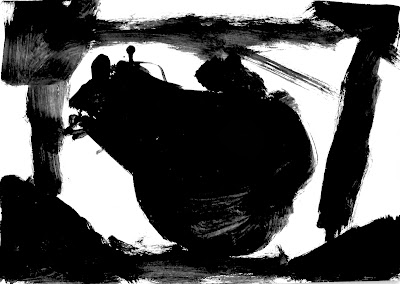 some last minute research but better late than never…

Its amazing where research into a subject may take you and the fascinating sidelines, distractions and personalities that may brighten your journey (while at the same time tempting you away from your eventual goal). The Story of Bideford Black Project has been no exception. Nearly every encounter has been a wonderful gateway to another story, an intriguing aspect of local history or contemporary politics, or simply a charming addition to the vast array of personal accounts and memories we have collected along the way – testament to the rich diversity and interconnectness of our world. Unfortunately not every detail can be preserved or represented, and the difficult process of filtering out the superfluous and endearing from the essential elements of the research, and of deciding what we want to, and can, say within the always-limited resources of time, space and money that are available have to be made.

One such lead took me to meet local industrial archaeologist and Bideford railway enthusiast Felton Vowler. Felton has been interested in gathering information and artifacts about North Devon’s industrial past since the 1970’s and remembers visiting the ‘Paint Mines’ and gingerly entering the disused mineshaft at Chapel Park a few years after its closure in 1969. Felton’s main interest had been in the railway systems associated with the mining industry, an interest that continues today with his dedicated work as secretary of the Bideford Heritage Railway[i] at Bideford and Instow Stations on the Tarka Trail. When he was younger Felton had been an outdoor activities instructor and keen caver and climber. He and a friend had gone into the mine but quickly left after deeming it far too unsafe. He remembers seeing two of the old mining trolleys and lengths of railway track but sadly was unable to retrieve them. They must still be sitting there today!

On the same visit Felton also spotted an old haulage sign at the entrance to the mine. The sign instructed operators of the bell code used in the mines. For the sake of posterity Mr Vowler acquired the sign and took it home for safekeeping. On meeting with him earlier in the year the whereabouts of the sign had unfortunately become a bit of a mystery! In the mean time Felton also vaguely remembered seeing a large enamel BIDDIBLACK sign at the Milky Way Adventure Park[ii] near Clovelly when the LynBarn Railway was there. Both the Milky Way and present Lynton Railway[iii] at Woody Bay had no recollection of the sign BUT Dave Tooke from Lynton Railway did have the Bideford Black Pigments Ltd haulage sign that Felton had lent to him some years earlier! On visiting the Woody Bay site to collect the sign for the project I was treated to a lovely ride on the railway along with a chance to look at the lovingly restored steam engines kept there.

With the new display in its final stages of design and manufacture the project is still open to any information and artifacts you may have and may wish to contribute to make it the best representation and reflection of this fascinating and vital industry to Bideford’s rich and evolving history.  It is hoped that the display will inspire further interest in the subject and provoke more fond memories, and has thus been designed to allow for further contributions as they arise. We continue to look forward to hearing from you. So, many thanks to all those who have generously contributed so freely along the trail and here’s to fascinating sidelines and distractions, and to the wonder, inquisitiveness and camaraderie of human nature and to the richness and abundance of the world on which our livelihood depends!

Getting our hands dirty at last!

A very important aspect of the Story of Bideford Black Project, funded by the Heritage Lottery Fund All Our Stories Grant, has been the sharing of stories across generations, or more simply put - the old miners sharing their stories with the kids. So, having gathered a great deal of information we asked two local schools, both situated at significant places along the Bideford Black seam, to take part in a series of workshops. East the Water Community Primary School on Mines Road and St Helen’s C of E Primary School, Abbotsham most kindly agreed. 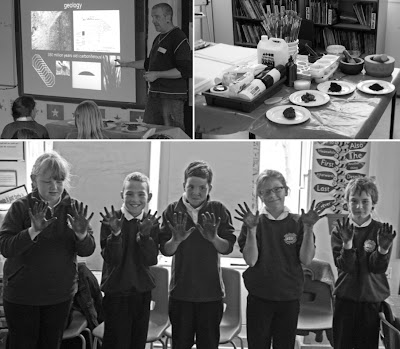 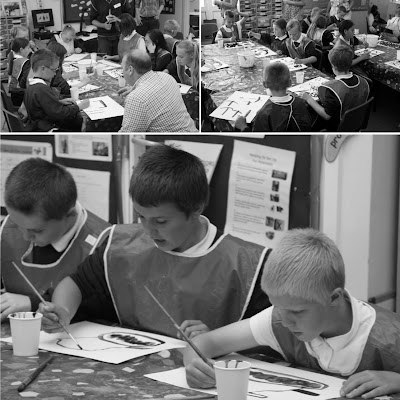 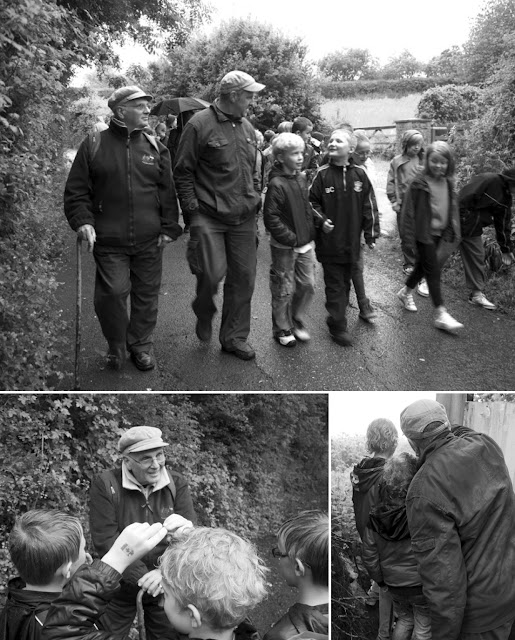 The 4 daylong workshops engaged the children (aged between 9-12 years old) and teachers (ages unknown) with their local history, that is Bideford Black Mining, through a simple presentation, a Q&A session with ex-miner Ron Pither and a short walk along Mines Road across Manteo Way to the old mine site at Chapel Park, looking at any evidence of the industry along the way. The children were then given a simple demonstration of how to make paint using raw Bideford Black pigment and then asked to create illustrations of the stories they had heard earlier using Bideford Black itself. While some children chose to illustrate of the stories, others simply enjoyed and learnt about the feel of this very different paint. Some of the pictures would then be used as part of the final display and shown in a special exhibition of work at the Burton Gallery.

As was hoped the children got thoroughly covered in the sooty black pigment and enjoyed a great day of stories, outdoor activity and painting. Everyone was surprised at the quality and richness of the paint, how it often didn’t do quite what they wanted it to, and worked very hard to make some great pictures. Nearly 400 paintings were made over the four days, East the Water School continuing the project during the week with further studies – we were utterly spoilt for choice. Thank you all for working so hard. We hope you all learnt something too!? The exhibition of paintings will be open to the public for a month in the Café du Parc at the Burton Art Gallery from 24th September. 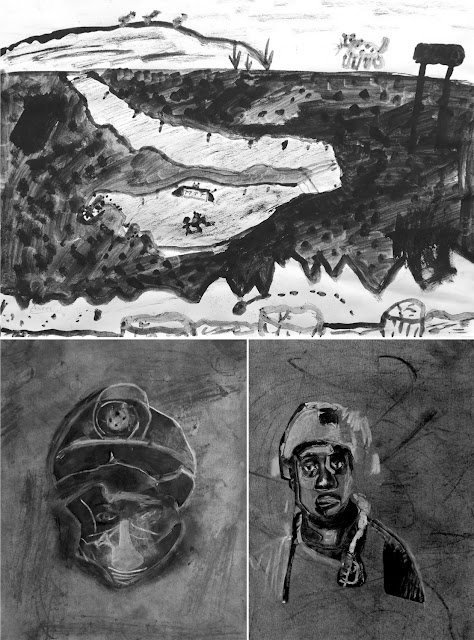 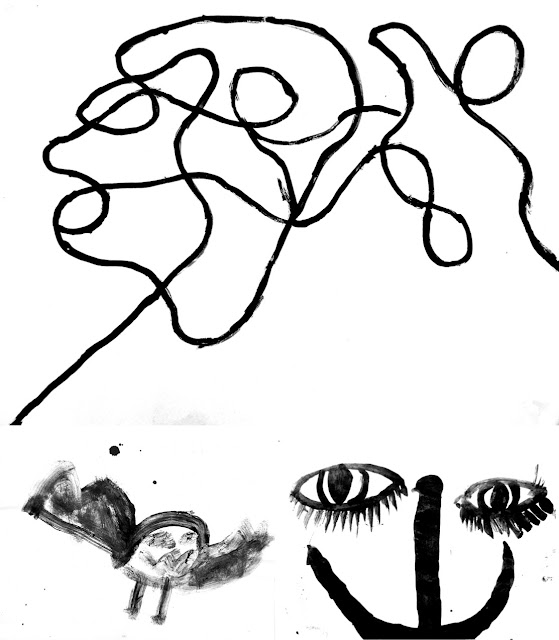 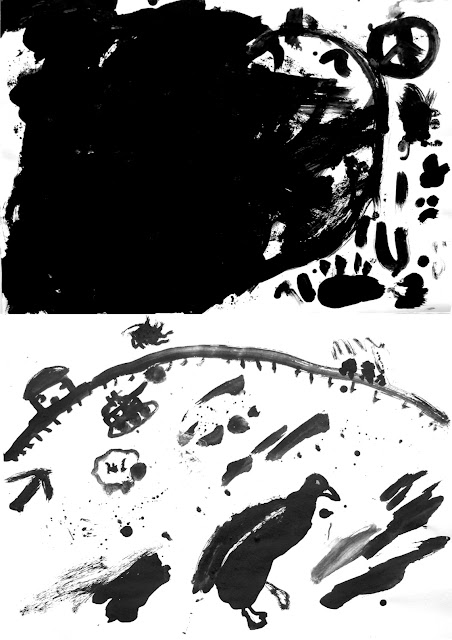 The workshops were led by artist Peter Ward and co-ordinated by Sadie Green with help from Burton Art Gallery volunteers Ros Ford, Mike Hedges and Nicole Hickin. They were enthusiastically supported by the teachers and teaching assistants at both schools – many thanks to all. Learning Coordinators Sadie Green and Julian Vayne have developed further educational material resulting from the project in the form of a Learning Pack for schools to accompany the display.
Posted by Unknown at 17:21 No comments: