BIDEFORD BLACK is a unique, naturally occurring carbon based mineral, or Culm deposit, running alongside seams of high quality anthracite (coal) across North Devon. The deposits were formed over 300 million years ago during the Carboniferous geological era on the Gondwana landmass, then south of the equator and experiencing a tropical climate. Our region was on a coastal plain covered in forests and cut by rivers feeding lagoons. The vegetation was Tree Ferns and other early plant, through which primitive animals such as giant dragonflies flitted and centipedes crawled. Within this envirement, the anthracite lenses formed in the river channels and the Bideford Black formed as over-bank clay deposits carried from the river channels during flooding and settling.into the lagoons.

According to research conducted by local geologist Chris Cornford, the coaly form is unique in that it contains a dominance of the Lignin of tree ferns rather than the mix of stem, spores, bark and leaf matter normally associated with coal deposits. He suggests that this may have been due to the trees being swept down river and trapped as ‘log-jams’ on bends and in ox-bow lakes (indicated by the lens-shaped pockets where it is now found). Under these conditions, the outer layers of leaf and bark were removed and swept away; the naked trunks were then deposited and trapped beneath layers of river sediment, and soil. Subsequently, the deposits were compacted and buried down to about 8km beneath the earth’s surface by mountains built during plate tectonic collision,

It was during this plate collision that the grinding and compressing of the fine vegetable matter in the muds of the coastal plain formed the greasy clay deposits we find today as Bideford Black. Under compression, the organic mater has developed flat hexagonal platelets, similar to that of graphite which we find in pencils. This platy structure may have been exaggerated by the shearing and sliding action of the earth as it was compressed deep within colliding tectonic plates. The mineral consists of roughly equal parts of carbon, silica and alumina – the carbon providing the exceptionally rich black colouration that made it so popular as a pigment. The seams stretch from Hartland and Abbotsham on the coast in a southeasterly direction beneath Bideford and inland as far as Umberleigh. 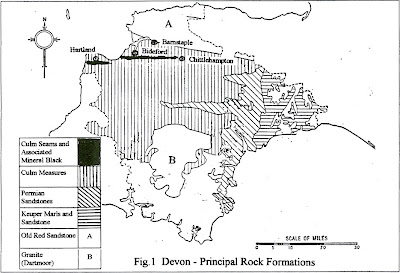 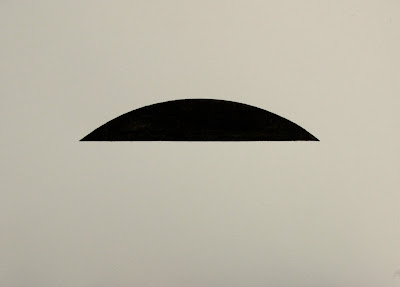 While Chris has conducted extensive and comprehensive research into BIDEFORD BLACK, geology is by no means a finite science and any other ideas or thoughts about its physical and chemical nature and formation are more than welcome...