We are receiving some fantastic comments about the exhibition -  it really is important to see these works.

Bideford Black: The Next Generation is the outcome of a year during which nine artists from across the UK pushed Bideford Black pigment to its physical limits and asked what the material might mean today. Below is an itroduction to the artworks, but experiencing them is invaluable. The works, as a collection, can be read individually or as a joint narrative.

The film presented by Liberty Smith reviews the research process behind the works. Thirty minutes of footage captures a year and underpins the exhibition.

Artist Luce Choules explored both physical and emotional geography through her experimental fieldwork. A Fellow of the Royal Geographical Society, Luce has developed Seam, a choreographed exhibition for Bideford Black: The Next Generation. Expect it to change during the exhibtion period. 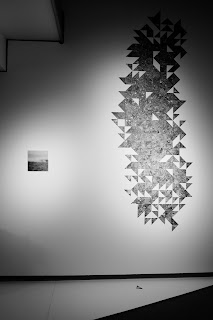 Collapsing man-made and natural environments, artist Corinne Felgate has created a selection of site-specific poems and an installation in a traditional museum cabinet. The latter is comprised of a series of fossil-like sculptures, which have been meticulously moulded and cast from paraphernalia from cosmetic  industries which formerly used Bideford Black. 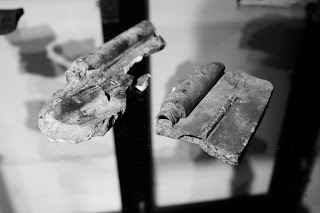 Prompted by Bideford Black, and using a shared sketchbook, artists Neville Gabie and Joan Gabie conducted a ‘dialogue of ideas’ with Cultural Geographer Ian Cook (University of Exeter). Together, the three explored the physical, social and geological significance of Bideford Black, presenting several films of studio drawings and artefacts discovered and created along the way.

Glaswegian artists Craig Little and Blake Whitehead - were intrigued by the environmental processes that formed Bideford Black. Ever-elusive, the Scottish duo kept their work under tight wraps during its development. They made LP records with the pigment, casting it and playing it. They battled with it to make it give up the secret of its uniqueness – to share its voice. Listen to the experimental sound recordings of their raw data – and their surprising conclusion.

Lizzie Ridout has set Bideford Black within a new taxonomy - or story - of the colour of Bideford Black. Incorporating her research into the subject, the Cornwall-based artist has created a printed publication, pieces of which audience members will be able to take away. She foraged the Burton archive, gathering tones and marks from the collection to present in a different, delicate way in the gallery.
Sam Treadaway

Sam Treadaway is exhibiting a scent-based work. A Clearing is the result of a re-imagining of the origin of the Bideford Black material - Tree Fern forests of the Carboniferous period - via the medium of smell. Subtle variations of this scent composition, based on accords of wood, green, earth and petrichor (produced in collaboration with Clare Rees, Library of Fragrance), and inspired by visits to Bristol Botanic Garden and Kew Gardens, London, are transmitted, via stainless steel drums brimming with Bideford Black, into the gallery space.

Bideford Black: The Next Generation is a Burton Art Gallery project managed in association with Flow Contemporary Arts and Claire Gulliver. It is supported using public funding by the National Lottery through Arts Council England.

We are grateful for the support of the Friends of the Burton Art Gallery and Museum.