As the Show & Tell day at the Burton in March drew to a close we were approached by a gentleman whose interest in the project was a concern about the inclusion of the Bideford Black Pigment Ltd Chapel Park Mine and Processing Plant site in the Torridge District Council’s Development Plans[i]. His distress was caused not by the obliteration of a site of local historic interest or the possibility of the dangers of building over numerous mineshafts and underground cavities, but for the safety of the resident badger population whose sett entrances may be seen in the black topsoil littering the area and which had apparently been disturbed by precursory development of the site. Indeed on a recent visit to the site with ex-miners we tried to imagine its previous incarnation as they reminisced about the tranquil beauty of the valley where they played as children, courted their loved ones and worked many years ago. Apart from the concrete lined stream (to stop the mine shafts flooding) and the dusty noise of the processing plant, the valley was lined with trees and surrounded by dairy farms – ‘a beautiful place to work, right out in the country.’ It was hard to imagine looking across the piles of rubble and freshly landscaped land, surrounded by new housing developments and supermarket. Let’s hope that whatever development does take place at Chapel Park is done with respect and sensitivity to its rich past. 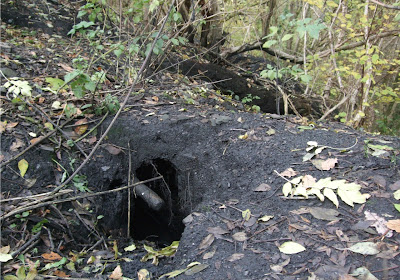 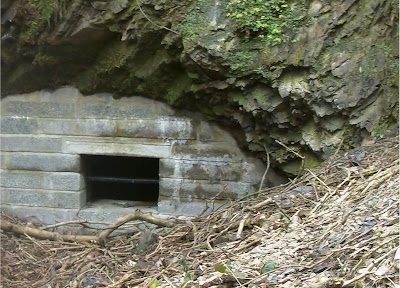 The gentleman also informed us of the cleaning away of several cars and sealing of the old Mary Ann shaft entrance in Cleave Wood in January 2011. While the blocking up of the mine for safety’s sake has been done quite clumsily it has included a small portal to allow for the comings and goings of a rare and protected population of horseshoe bats who have taken residence in the tunnels. Looking through the opening into the darkness beyond to the sound of persistent dripping can only give a glimpse of the miners’ daily working conditions but it is well worth a look if you are sure-footed enough to find it.

[i] On further investigation it was discovered that it is for sale for £1.4 million with plans for 13 luxury detached properties. The plans also include landscaping and regeneration of the woodland and stream as a nature conservation area. For further information about the development see http://www.primelocation.com/for-sale/land/bideford/?include_retirement_homes=true&include_shared_accommodation=true&include_shared_ownership=true&new_homes=include&price_frequency=per_month&property_type=land&q=Bideford%2C%20Devon&results_sort=highest_price&search_source=for-sale