I have written the following story as it might have been, having talked in my research to two miners both of whom were extremely helpful and informative: thank you very much to Ron Pither and Gerald Ford.
Ros Ford (Lead Volunteer, The Story of Bideford Black) 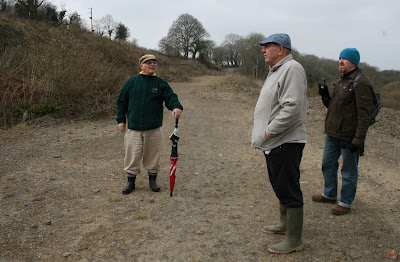 Having had breakfast I walked up Mines Road for 0800 hours ready to start work. Upon entering the mine I walked past the office on the right to the shower block to change into my work clothes: Work clothes kept there for the purpose of mining, no special safety wear other than a hat, and wellington boots to keep my feet dry:-just old clothes caked in Bideford Black from previous days work... A carbon lamp in addition to show the way when underground and to detect any unwanted gases, and a pick axe to hue the rock out with.

As I walked into the mine the uprights made of wood formed the ribs of the mine and they joined together overhead with fir and pine tree branches in which hornets were sometimes found nesting .Once the seam was reached, work began, hard manual labour with a pick-axe.

The Biddie Black was mined out and put into a truck  which was then hauled up on a winch wire. There is a bell system to ensure that everyone knows to be out of the way as the trucks are hauled up and down the track: 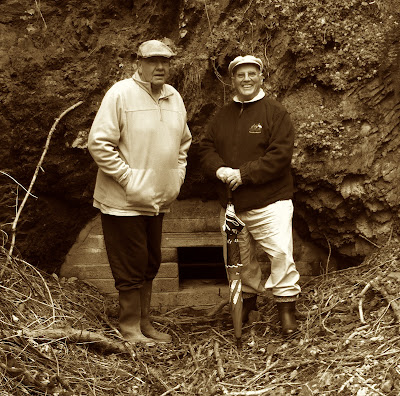 To ensure there is air inside the mine there is a shaft called ” The Mary Anne” ( see photo 1). This ensures that  fresh air is always circulating within the mine, healthy enough for us to breathe. If I need a wee while at work, I just find an appropriate place and relieve myself and cover it with soil that is lying around, anything more I have to go up to the surface and use the toilets :- ( these toilets have a green door with green lattice work above them ( see photo 2)

At the end of the shift I resurface and head for the shower block very basic showers which at the end of the shift are very black. Biddie black by its very nature is very black, oily and takes a lot of washing out. The carbolic soap used to wash is provided by the management. I remove my work clothes, shower, change back into my “ going to work clothes” and then head for home and supper and rest after a very physically demanding day. 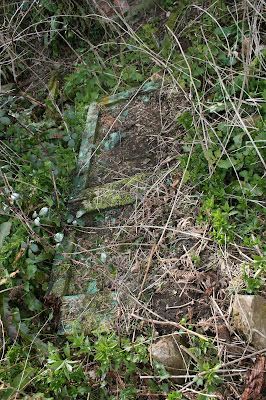 Apparently after finishing working in the mine, one of the miners said that his skin actually sweated black pigment for about three months!

Good camaraderie was essential when working together in the mine, they all relied upon each other to keep one another safe and interestingly during the time that the two miners I spoke to worked at the pit  there were no serious accidents.

Regarding the hornets found nesting as one of the miners told me, "They didn’t bother us and we didn’t bother them”.
Posted by Unknown at 14:39