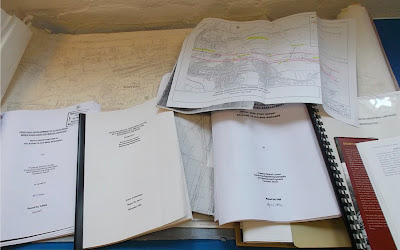 As part of our continuing search for information about Bideford Black a fascinating and informative few hours were spent with Jon Charles, Building Control Surveyor from Torridge District Council, who shared research and maps completed by John Spencer a former surveyor for the council in the early 1980’s, among others. The presence of mine shafts beneath the town have made it necessary to study the safety of building developments in certain areas - basically a strip of land running east-west parallel with the old bridge between Greencliff and Chittlehampton where the seams ends. 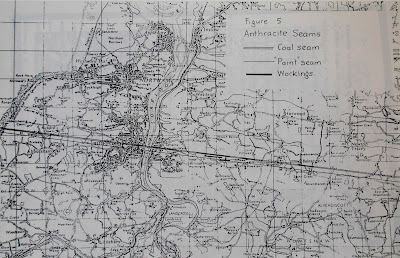 A particularly inspiring publication was ‘Foundations For Low Rise Buildings in Torridge District Council Devon’ by the former head of Building Control Derek Sheldon, revealing a dedication to hands on learning and presentation about the area rarely seen today. The book was produced as part of Derek’s qualification for the job.

In general the maps and charts show a surprising number of possible and known mine shafts across the town created for the extraction of both anthracite and ‘paint’ from two parallel seamsinclined at a 70 degree angle north to south, and included surveys regarding the Alverdiscott ‘link’ Road as well as various newspaper clippings of land collapses and letters between planning authorities and the Mining Company. To counteract the possibility of mineshaft collapses during building and development a process known as ‘grouting’, whereby concrete is poured into any voids created by mining activity, is employed.

Jon also recalled his own memories of incidents regarding the mines from growing up in the area including investigations into the ‘Liberty James’ scrap yard off Mines Road polluting the water table through the dumping of cars into disused mineshafts. Many thanks to Jon for his time and generosity in helping unravel the story further and giving a well-informed and enthusiastic depth to yet another fascinating aspect of the project.